The laser Department of the Ufa research Institute of eye diseases was founded in 1983. The unit has 3 ophthalmologist. The Department is equipped with modern equipment of domestic and foreign production.

Laser treatment is used for more than 40 diseases diseases of the eye:

A valuable advantage of laser coagulation are the bloodless method, minimal tissue trauma of eyes, quick operation and good tolerance to her patients. Laser surgery without opening the wall of the eyeball avoid complications inherent to stab surgery, and to make them ambulatory. Of considerable interest is the stimulation of visual function in the retina under the influence of a weak energy laser radiation amblyopia, atrophy of the optic nerve, dry maculodystrophy etc.

Currently, the Department introduced all modern methods of laser treatment:

In pathology of the anterior segment of the eye:

Every year doctors laser treatment qualified advice and medical assistance to more than 10 thousand patients from the Republic of Bashkortostan and other regions of Russia. Laser Department in close cooperation with the scientific staff of the Department of vitreoretinal and laser surgery, doctors-ophthalmologists of the IV microsurgical Department and adult consultative-diagnostic Department plays a key role in providing specialized care for patients with diabetes. 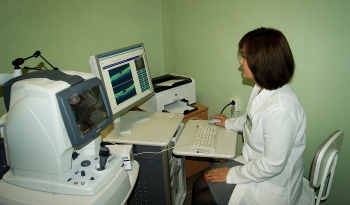 Optical coherence tomography (OCT) of the retina makes it possible to diagnose subtle changes in the structure of the retina, which lie outsidethe limits of resolution of other methods of research and just invisible when viewed from the fundus. The OCT allows to obtain unique information about the anatomy of the examined retinal structure at the microscopic level. The method is contactless, the procedure is safe and painless. In Ufa research Institute of eye diseases using modern optical coherence tomography, new generation of Retina Scan – 3000 (NIDEK). Due to its features - high-speed research (53 000 A-scans/sec), high resolution (8-10 microns), a large normative base, user software NIDEK RS-3000 allows you to expand the study Protocol and to increase the accuracy assessment of fundus structures.